This production process is distinguished by the non use of artificial adhesives to join wood fibres, using water instead. The final product shows a dark brown tone originated during the polymerization of the lignin and sugars in high temperatures, and specific marks on one side due to the metal mesh the product should rest on during a part of the process.

Sorting
The wood is delivered in our facilities Betanzos HB, sorted and stocked in the lumber yard.
Chipper
The production process starts cutting the wood into pieces in the machine to turn it into wood chips.
Pre-heating
Those wood chips are boiled with water steam at high temperatures to break the fibres and get the lignin, the natural adhesive from eucalyptus wood.
Shredding
Mechanical breaking of the wood chips to get fibres.
Dilution with water
Fibres are diluted in many steps.
Forming machine
The remaining fibres are put into the forming machine by wet process, obtaining as a result a wet blanket.
Cutting
This blanket is cut with the same dimensions of the press, put onto a drainage cloth and inserted into the press.
Press
The press partially drains the water and evaporates it, thanks to the high pressure and temperature applied during the process. The join of the fibres to form the boards is possible thanks to the thermoplastic properties of the lignin coming from the wood.
Thermic process
Boards must undergo a thermic treatment to achieve the high physical and mechanical resistance properties required.
Humidification and cutting
Afterwards, boards humidity is stabilized (6% humidity) and they are sorted and cut to length to end the production process.
Transformations
By clients request, boards are painted, cut, drilled or sanded to be used in many applications.
Stocking
After production, they are stocked and prepared for its delivery.

The factory in figures

The factory Betanzos HB was built in 1975 by Group Tafisa under the name of Tradema willing to produce high density fibreboard by wet process. In 1993, the factory was bought by Group Sonae Industria, which renamed the factory in 1997 as Tafiber.

Betanzos HB starts its fibreboard production in May 2015 after acquiring the manufacturing assets of Sonae in the village Infesta. 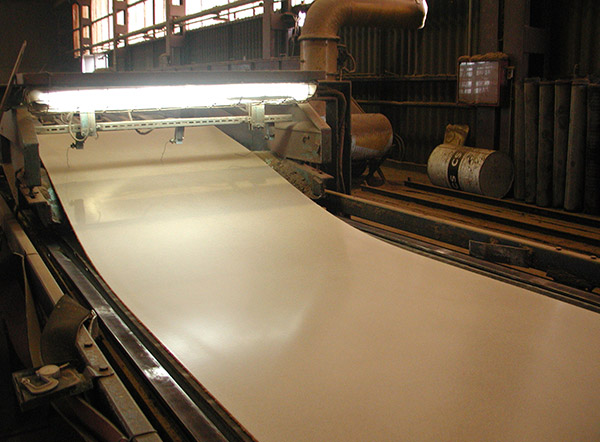